[LEGO Real and Fake] A clown came to town. 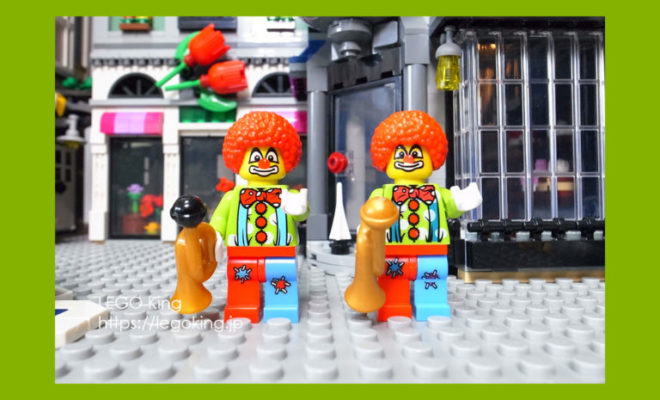 A clown with a trumpet has come to town.

People were full of laughter.

One man with a yellow-green shirt, red and blue pants, and a trumpet in one hand was in the audience.

The fake clown was sent in a bag of Oriented Poly Propylene (OPP) film.

Let’s compare them from the upper body .
As usual, the real LEGO is placed on the left side of the photo.

Afro hair-It looks like raspberry, but it looks delicious. You can use it as a sample for a cake shop.

Afro hair is difficult to distinguish when viewed from above, but can be distinguished by comparing the parts that are fixed to the head.
The real thing of LEGO (Lego) is round like a black arrow. Imitations (fake) are hexagonal. Of course, the circle is technically more difficult.

Speaking of the pants, both feet have a seaming pattern, but the fake clown (right) has part of the blue seam (the patch) disappeared.
The location of the joint pattern on the red pants side is clearly different between the real clown of LEGO and the fake. The counterfeit is on the top without any steps, but it seems that it was changed because it is difficult to print where there is also a step.

Trumpet in hand.
Is this the easiest to distinguish? . . The one with the round part painted black is the real LEGO.

Among the LEGO minifigures I’ve seen so far, this clown is a kind that makes it relatively easy to distinguish real and fake.

For the time being, most people exhibiting at Yahoo auctions and Mercari

“Compatibility” “possible to play with LEGO” “Not LEGO”

Because there is a sentence like this, it is unlikely that you will buy it by mistake, but be careful because it sometimes comes out for sale.