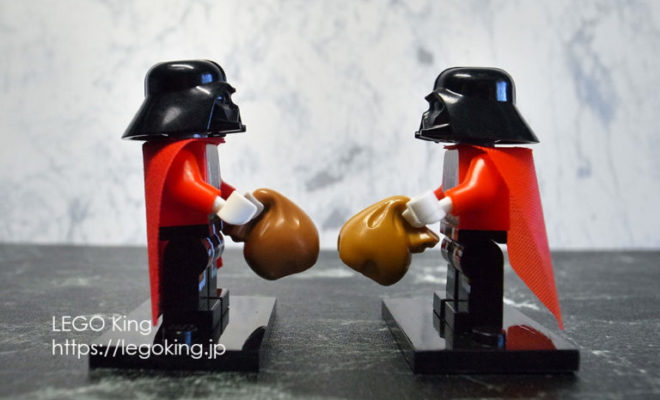 An out-of-season santa came from space.

Today we are introducing the Santa version of “Star Wars Darth Vader”, a popular minifigure that has few sellings at flea markets.

The two who is arguing is the Santa Claus version of Darth Vader, the anti-hero of the famous Star Wars.

In fact, one of the two is real and one is a fake Darth Vader.

Well, I have a Darth Vader minifigure at hand, but it’s hard to tell which one is real.

The faces are quite similar.    The one with a deep red injured is a fake (right). In addition, Darth Vader’s fake can be seen that there is a groove in the head part. Although it is sloppy, I think there are some beautiful fake minifigures.

If you look closely, there are many places where you can point out the color, but when it is sold it is only one, so it is difficult to distinguish it.

Each parts has “© LEGO” notation, so we would better to check it.

The color of the bag that holds the gift is different, but it is difficult to distinguish it in frea markets.

On the left is a real Darth Vader cloak.

As you can’t see in the picture, the fake Darth Vader cloak is so thin that you can see through the back of the minifig through the cloak.

“I use the force”

Even though blocks similar to Lego are sell, it is difficult to judge because some patents have expired, but Star Wars, Friends, Ninjago, Disney characters etc have rights issues , Where you want to get genuine.

Most fake LEGO products sell in Japan have precautionary notes such as “compatible LEGO” and “you can play with LEGO”, so I think it is unlikely that you will buy them by mistake.

However, there are people who have not noticed, so if you want to get a genuine product, please check before purchasing.