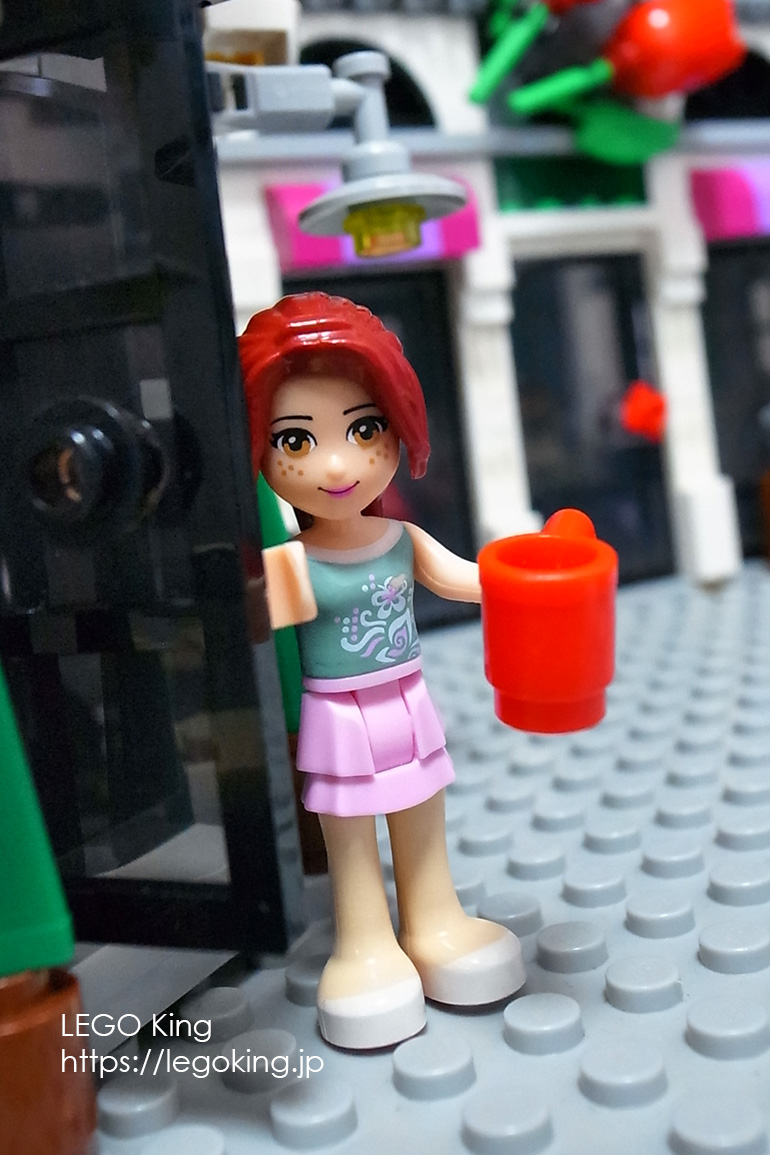 This set is a stand that sells lemonade and comes with a lot of accessories, and the pop colors are cute. Since the total number of blocks and accessories is 112pcs, it seems that elementary school students can make them without problems.

The Friends series is a new type of Lego series created for girls in 2012, with good-looking minifigures and cute faces.

The Friends series is for girls, so I didn’t buy it. But when I got “Friends Series @ Lemonade Stand @ 41027” to introduce for this site, it was “very cute”series, and I felt it was popular for a girls.

From the left, it looks like “juicer, flower”, “cookie set and honey bottle, money” and corn but “lemon”.

It can be used in combination with a large Lego. The signboard “LEMONADE” is also looks like a festival and the atmosphere is good.

The motorcycle seen in the center can be looks like the old Italian Vespa. I like it.

The motorcycle used by Audrey Hepburn and a reporter in a sightseeing spot in the movie “Roman Holiday” is also a “Vespa”.

The actual Vespa has a light in the center of the handle. But if a round block “plate 1 x 1 round” can be attached in the middle of this handle, it will look exactly like Vespa and it will be cool for men It might be popular as “I just want a motorcycle!”

The faces of the minifigures on both sides are LEGO’s traditional “smile”, but the style, face, and hairstyle from the Friends series have become cute.

I think that such a big change would have been difficult at Lego. Interactions between groups that do not want to break traditional LEGO styles and groups that are trying new things are visible. . . Now that the Friends series is very popular with girls, the LEGO company would be happy.

It’s cute, so just decorating it will be a picture.

A mini doll of LEGO Friends series have drinking a coffee.
It is a little big coffee cup.

LEGO’s coffee cups always been big, but they need to have recess bottom of the cup to fix it to the block, so they need some size.

But I want a small coffee cup that fits the mini-figure. If LEGO company will made a special attachment for bottom of the small coffee cup, and I think it can be solved it.

The lemonade stand is also very popular ♪
Busy in the line from morning.

This set will surely please girls.
If I get a friend series again, I will review it.
For fun ♪