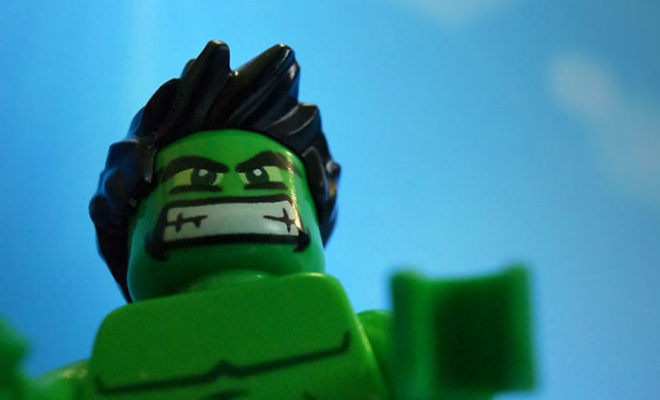 This is a review of “LEGO MARVEL Super Heroes Mighty Micro Hulk vs Ultron 76066”.

It didn’t have anything amazing, but I liked the “mini hulk” in a small car more than I had imagined.

The naughty face and the deformed powerful muscle car are nice and cute.

The muscle car is a large-displacement two-door sports car from the United States in the late 1960s and 1970s, which was designed for high-power, high-speed driving. A car series that was very popular with many attractive designs such as Corvette, Camaro and Dodge Charger that ran at this time.

However, fuel economy was poor, and due to the introduction of exhaust gas regulations, it was decided to disappear from new car sales in 1978, but muscle cars of the 1960s and 70s are still restored (those with clean bodies and engines) And many lovers own it.

The Hulk and Ultron’s short-footed minifigures are also cute.

Big hands and compact cars are too cute.

Before this green superhuman Hulk, you were a brilliant physicist named Robert Bruce Banner.

Dr. Robert has been exposed to a large amount of gamma rays (radiation) to help a boy who has lost his way into the test site during the development of the new bomb.

The story says that Robert’s DNA (gene), which was exposed to lethal gamma rays, changed into green skin and a giant Hulk who was far away from humans due to negative emotions such as anger and hatred.

Hulk, in addition to its tremendous power, has the ability to live in the sea and in space, and has recently been able to control emotions. A member of the Avengers.

A car with claws included in the “Ultron” package. The nails and buttocks are made to move.

So the program decided. (Bitter smile)

And this Ultron is the greatest threat to humanity.

Ultron has the ability to penetrate many guarded computers, and when it appears as a robot, it has superhuman strength and speed. What will happen to humankind? . . Please watch the movie！

Mmm, Mini Hulk is the best!

This “LEGO MARVEL Superheroes Hulk vs Ultron 76066” is a very satisfying set with more than I can imagine. It was good to buy.

The Mighty Micro Series have in several other versions, including “Spider-Man vs Green 76064” and “Captain America vs Red Skull 76065”, so I’m thinking about buying another one. . .