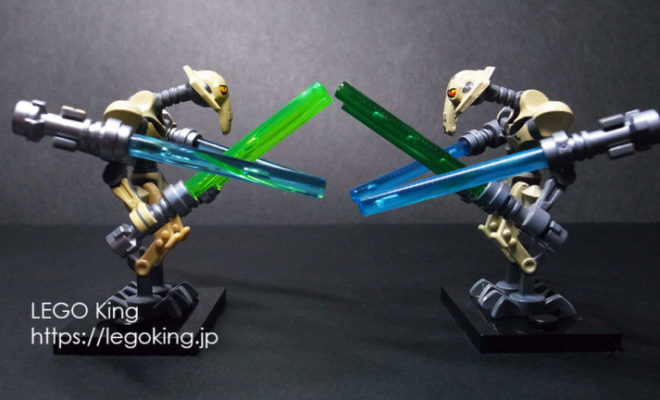 I compared LEGO Ninjago’s “genuine and fake Golden Lloyd” before, and found that it was difficult to distinguish them individually.

Immediately, try to compare General Grievous’s genuine with a fake!

↓ Is this genuine? Fake?

The correct answer is “real”.

Now that I have a genuine and a fake at hand, I can tell which one, but if one fake was sold on the Internet, I might not be able to distinguish.

I don’t know if it will be helpful, but I’ll take a closer look.

↓↓↓ First, an enlarged photo of the face.

The fake on the right side is whitish due to the degree of light, but it is difficult to actually judge by color because it changes depending on the computer monitor and camera settings.

The eyes of face is clearly different, but there may be other fake “General Grievous”, so I feel that it is scarce as a source of judgment.

All the photos are real on the left and fake on the right.

That said, the real face is about 1.3cm long, so you may not notice any irregularities on the face.

The real one on the left has a beautiful painted surface and a glossy color.

There are two differences between the red circles.

３．part number? Can be checked (left arrow on the photo)

Number 2 is relatively easy to identify, so if you want to get a genuine product, it might be good to remember.

↓↓↓ It may be difficult to judge by the color of the lightsaber parts.

↑  I tried shooting with the background color changed, but it was difficult to distinguish between silver and gray, and it was harder to shoot than I expected.

The silver one on the top is genuine. Below is a fake.

In addition to General Grievous’s feet, there were other places where painting was rough.

This is completely NG for those who want to get genuine products.

The back of General Grievous.

This is also a fake on the right, but you can see that the shading of the paint is occurring and it is rough.

I guess General Grievous of Star Wars is difficult to paint compared to other products because the parts are small and fine.

It’s difficult to tell the difference between a General Grievous genuine article and a fake one, but the fake dirty paint may be the top class minifigure.

↓↓↓ It is quite difficult to distinguish General Grievous of Star Wars from genuine or fake only by photograph. In the picture below, the only option is to judge whether General Grievous’s hands are painted or not..

It’s hard to tell the difference between them.

The leg of the genuine product (left) has the mark “© LEGO”. I guess the last thing is to rely on this. . .

Please note that the above is a fake confirmed as of January 2020, and the accuracy may increase.