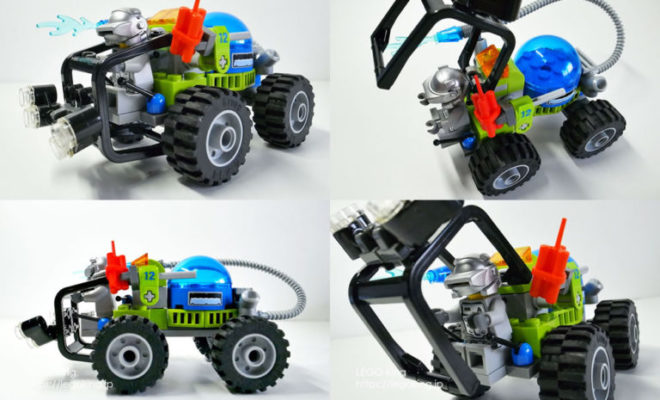 This time, I introduce the “Fire Blaster 8188” of the LEGO “Power Miners” series released about 10 years ago.

This is a discontinued product, a rare item that is not often seen in flea markets because there was no regular sales in Japan.

These sturdy cars and monsters is loved by many boys.

Speaking of which, I turned the minifigure’s face into an unfriendly bearded man.

This younger person’s face is correct.

The most popular of “Power Miners’s character” is a small and charming rock monster! !

The face with the mouth open is also cute.

The name of this rock monster is “Convertistics”.

This is the “Fireblaster” car with a powerful engine.

The thick pipe that protects itself from shocks looks like a buggy car and looks cool. Thick pipes are designed to move, making it easy to get in and out of minifigures.

Lever is attached to the left and right of the driver. The right lever is the steering wheel, the left lever is the accelerator and the brakes …(
maybe.)

There is a tank in the rear, which can discharge water like a fire engine.

Because it’s a monster, you have to show a little bit of a scary figure.

“Hihihihhh, somebody help me. I can’t reach my feet.”

Wow, he just was clinging to the car desperately. . .

The red item beside the driver is a state-of-the-art dynamite that destroys anything. The dynamite launcher can also break rocks blocking the road.

Woo, I will take the crystal from the rock monster!

Wao, monster who is amazing power.

I will show you the power of the robot suit! Hey, give me the crystal!

Oh, are you hungry?

Speaking of which, when buying LEGO products for small children, it tends to flow to adult tastes and popular characters, but Power Miners also have cute “ rock monsters ” and many vehicles that seem to be sturdy and strong recommendation.

I recommend it, but it’s a product that can’t be found in Yahoo auctions or frea market.

Rock monsters are so cute that some people just want it, and it’s easy to understand that only minifigures (rock monsters) are on buy and sell.

If you want to get a car (fire blaster) and a rock monster, you might want to find a new or used one at the flea market. If you’re lucky, you can get it cheap! ?