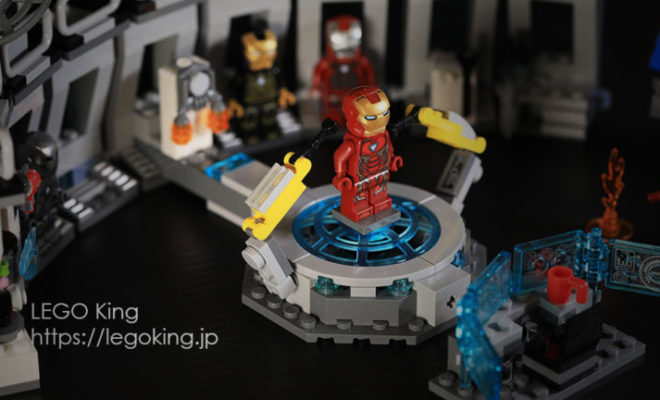 Christmas was approaching and sealed with an astonishing request saying “I want a Pokemon monster ball!” (￣▽￣;)!!

In January of the new year, we decided to open it under the condition that we will assemble together for the time being ♪

Since there are not many parts, even a child can be assembled in half a day.

“LEGO Super Heroes Iron Man’s Hall of Armor 76125” is a set that recreates the Hall of Armor and includes four Iron Man minifigures and outriders. In the center is a robot arm with a turntable.

This is irresistible for Avengers Marvel lovers.

Minifig Tony Stark’s face is also cool. It’s nice that the mask moves up and down.

The light blue screen panel in the lab (laboratory) is also cool!

Iron Man who seems to start moving at any moment.

Iron Man is all cool, but in the minifigure this metallic MK1 is one of my favorites.

There is an opening and closing cockpit so that Iron Man can be boarded.

Closing the hatch would darken Tony Stark, so I shot it without closing it.

Although the number of parts is small and the fun of assembling LEGO blocks has been halved, it is definitely a product that Avengers fans can recommend!