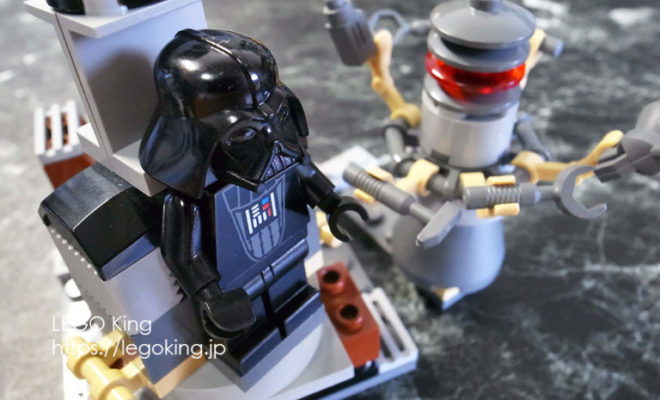 This set was released in 2005 and recreates Anakin’s transformation into Darth Vader in “Star Wars Episode Ⅲ.”

The following three items are included. The number of blocks is 53 pieces.

A scene during the surgery for Anakin to become Vader.
Anakin defeats Earl Dooku, who Obi-Wan and Yoda couldn’t defeat, alone, and has the strongest power in the series, and has numerous numerous achievements.

Despite the achievements that everyone acknowledged, he has been a slave since childhood, and he has a dislike of being restrained from above and has a strong reluctance and humanity who can not control the intense emotions well. Anakin could not be promoted because of it.

Anakin has become increasingly dissatisfied and distrustful of the Jedi.

Anakin’s dissatisfaction with the Jedi is fascinated by the temptation of Darth Sidious, the first emperor of the galactic empire who was the enemy, and fell into the dark side.
And finally, the Jedi knight Anakin finally becomes Darth Vader, the Dark Lord of Sith.

The operating table can made to rotate.

Lightsabers and capes are not included, so get them on your own or at a flea market.

One Anakin Skywalker and one Darth Vader are included.
The left is Anakin before transformation. The right is Vader.

Since it is a product of 15 years ago, the design of Darth Vader is quite simple, but this is a feeling that makes me good.

I don’t know why it became so expensive, but in Japan it is exhibited from 3000 yen ~ with box, so if you are interested, try searching for “LEGO Star Wars Darth Vader 7251” Maybe ♪