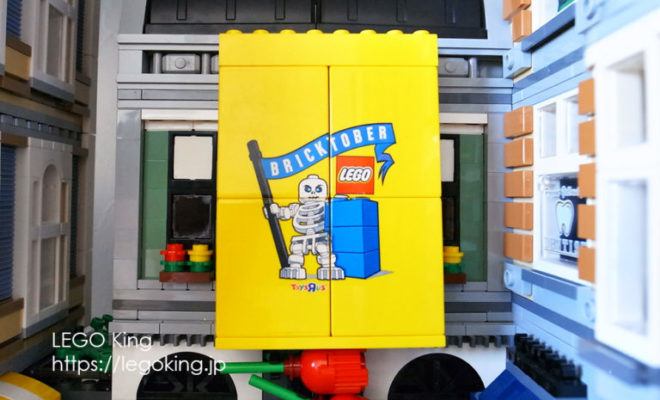 Today I will introduce a rare LEGO Duplo blicks that completes one picture with four blicks.

If they want to get it all, had to go to buy a LEGO set every week, so I think it was quite hard.

But I was impressed that it was a challenging and interesting project.
It was difficult to carry out such a project for a long period of one month, and I was really impressed with the United States.

The first week of October is a print blicks of the body and legs of the skeleton.

If you arrange four blocks, a LEGO Halloween picture will be completed. These were distributed one by one at TOYSЯUS every week.

The printed blue block at the right of the photo was distributed in the second week.
“Uh, I want a skeleton head.”

Skeleton head distributed in the third week.
Complete with one more. Once we have this far, we have to go to Toys R Us final week.

Finally, the logo and flag of “LEGO (LEGO)” enter and it is completed.
“Yeah, I got it all”

Those who had been go to ToysRUs for complete the blicks over a month would have been happy.

These events can only be done by major companies, but these days, it is difficult to complete such expensive projects, as online shopping becomes mainstream.

In fact, Toys R Us in the United States ended bankruptcy in 2018 and closed. (The profit of Toys R Us in Japan is not bad and it is open)
It looks like they’re moving to resurrect Toys R Us in the US. One of information said that it will open resurrected in 2019, so maybe it has already been restarted.

By the way, the notation of Toys R Us was “Toys‘ Я ‘Us”, but it was renewed in 2007 and changed to the current “TOYSTOUS” logo.

The reason why Toys R Us’s “R” is reversed seems to be that children who have just learned the alphabet sometimes mistakenly write “R” in reverse.

We will introduce rare blocks again next time.
For fun ♪

[LEGO Real and Fake] A clown came to town.