[LEGOLAND MiniLand] The cityscape made of Lego blocks is too amazing ♪ 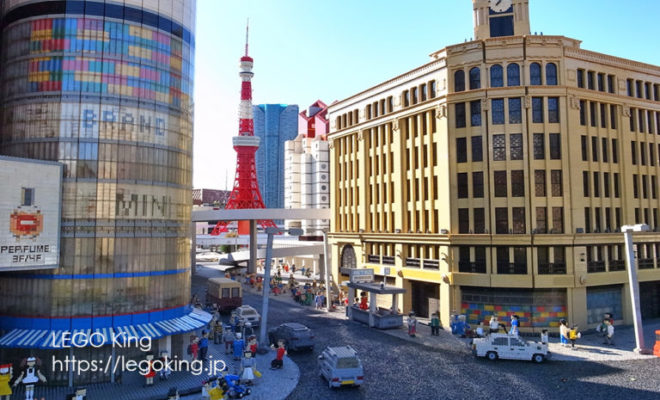 Legoland has a “Miniland” area, which is a sightseeing spot made with LEGO blicks and can enjoys the cityscape.

The cityscape recreated by LEGO professionals using 10,496,352 (more than 10 million) LEGO® blicks is really well-made and worth watching ♪

This is the red bricks station building of Tokyo Station made of blicks. Stations, buses, and walking people with more than 100 years of history are full of presence and too amazing.

The site of the former Tokyo Central Post Office near the red brick station building of Tokyo Station was a bit of a fuss about the preservation and demolition of the old building, but it was good because we decided to leave the large exterior of the building.

In some cases, the goodness and atmosphere of an old building can be satisfied by only one, while in other cases, the one that remains as a complex can be more interesting to stay . There may be some dissent regarding the use of assets, but I think it was good that we decided to leave it.

The red roof at the back right is the real “LEGOLAND Japan Hotel”.

I think the LEGOLAND Japan Hotel is in harmony with the LEGO block town (miniland). I guess these sizes and colors are also calculated. . .

The old building with a clock on the right is the Wako Main Building in Ginza. Once you worked near here, you can see that it is well reproduced.

This is Kaminarimon in Asakusa.

This area is crowded with tourists, so I think it would be nice to put more mini-figure figures, but what about? . .

But the buildings on the left and right are well reproduced. Really amazing!

This is a baseball stadium, but it was also good. . . It’s also real that the outfield seats are shadowed when the sun hits.

I wanted to see the minifigures one by one, but I couldn’t watch them slowly because my son wanted to go on LEGOLAND’s rides. . . .It can’t be helped.

It can be understood that many children are more interested in LEGOLAND’s rides than the building made of blicks.

In Miniland of LEGOLAND, I thought it would be fun to have a Spiderman hanging somewhere in the building or have a Superman in the office to find out where it would be, so that it could be enjoyed with children.

Even if there is no Lego block for presents separately,

If they find it, just only press the stamp and the little child will enjoy it.

It might be nice to put Disney’s Mickey on a moving LEGO train, or put Darth Vader or Toy Story’s Woody in the baseball stadium.

↓ From here, it’s the entrance to the hotel and the block in Legoland.

At the entrance of LEGOLAND Japan Hotel, a LEGO doorwoman will be waiting for you when even if it rains and the wind to blow.

This is a fountain in front of LEGOLAND entrance. Of course,
Fish rays are also made of Lego blicks.

Cute Santa hat put on the head of the fish ray ♪

This is in front of “Submarine Adventure” and “Squid Surfer” in the adventure area.

Wow, a giant octopus is attacking the minifigure.

We need help them!

This is a fire hydrant exploded here and the water overflowed.

Because it is Christmas, gifts, Santa’s uncle and Christmas tree are also on display.

You can also take a commemorative photo with LEGO’s friends characters that are popular among girls.

This ancient Egyptian monarch Pharaoh is also made of Lego blocks.

In addition, there are various kinds of animals and mini-figure made of Lego blocks, so I think it will be a fun day to find them.

It might be nice to bring your favorite mini-figure, find it in Legoland and take a commemorative photo. I hope you enjoy it.