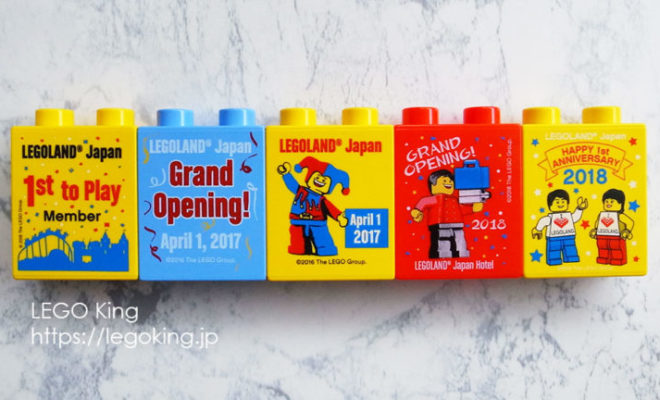 All are just cute ♪

“LEGOLAND Japan” has a grand opening on April 1, 2017, and there is a special block was distributed when “LEGOLAND Japan Hotel” opened on April 18, 2018. All of them are just cute ♪

There are other items distributed at the open event, but I have not obtained yet. . . The above five are all limited and precious. But you can get it at the flea market, so try to find it.

Clowns were distributed in commemoration of the opening of LEGOLAND Nagoya. The colors are beautiful, and the pictures are cute.

The painted print (clown) seems to have been used since LEGO’s founding. Although there were various things on the way, LEGO which has been continuing to improve the quality of the block for a long time, is really amazing.

This clown block is one of my favorites.

The blue block was exchanged for a guidebook coupon on the first day of 2017. The refreshing light blue is eye-catching.

These LEGO blocks have a lot of yellow, so if you mix them with light blue or red sometimes, they will look beautiful when you decorate them!

The block “1st to play” was a limited block distributed only to annual passport buyers in the first year of opening.

Red, blue and yellow stars (confetti?) are scattered in the blocks. I also like the KNIGHT’S KINGDOM castle, which is colored in light blue, and the picture of the first roller coaster “Dragon” we rode with my son.

The red block printed with “GRAND OPENING! 2018” was distributed at the Hotel Grand Opening. It’s nice that the minifig carrying the luggage drawn on the block is a hotelman.

If when you decorate these commemorative blocks, I guess this red block is also one of the things you want to get. The appearance when decorated with vivid colors is also GOOD. Recommended.

Last but not least, the “HAPPY 1st ANNIVERSARY” printed on Brick was specially distributed to those who obtained an annual passport on the first anniversary of Legoland.

Special bricks (not for sale) are distributed on the occasion of the founding celemony, Halloween, Christmas, and rainy days.

The blocks introduced this time are those that can be obtained in the used market and can only be purchased for about 200 to 1000 yen per piece. If you are interested, try to find it at the flea market.

Next time, we will introduce special blocks for Halloween, Christmas, and super rare.